Dang Yai is proud to present his new and first album in approximate Thai.

He usually produces instrumental albums under his farang name: Hervé Senni or under the pseudonym of Danton Cue. But this time, he decided to sing in a foreign language to talk about his adventures in Thailand.

His knowledge of the Thai language is so limited that he uses more words than he knows in his songs. The result is curious, to say the least.

He is by far the one who understands his songs the least. According to his wife, his singing is understandable, but it is far from certain. So if he pronounces more or less correctly, he’s the one who doesn’t understand his songs. Otherwise, no one understands. And it’s not a big deal given the depth of the texts!

One of his main subjects is the difficulty of communicating with his wife using the Google translate application.

“Yeah Yeah Yeah” is a reccuring expression Bee (the beloved wife) uses to say “Talk to the hand” when he is trying to say something that the Google app is translating strangely.

In “Mai Crao Jai,” he jokes that he never understands anything when his wife talks to him. “Mai Crao Jai” is the famous and most beloved line he is using all the time about anything.

Finally, in “Bee,” he is relating, in English, more or less the same thing that he covered in “Yeah Yeah Yeah.” “Bee” is the first song he wrote when he arrived in Thailand. That’s why he wrote it in English. At that time, the only Thai expression Dang Yai knew was: “Sawatdee Krap.”

“Yeah Yeah Yeah” is the last song he recorded. He decided to order the album in a strange logic, starting with the latest tune and finishing with the first.

The rest of the album talks about the digestive issues he had facing Thai food, and the compulsive buying habit he has on Lazada. He also used few funny expressions he stumbled on in learning Thai books and the issue he is facing living near Chiang Mai airport.

The overall album uses Funk Rock music style with hard rock flavor and some jazzy atmospheres. The mood is 100% funny and not serious. If you find something looking like a spiritual or philosophical message, listen twice, You probably do not understand his pronunciation. If, after countless attempts to understand what he is saying, it still sounds like something serious, please report it asap. It was not intended, and he will correct it as soon as possible.

Where to listen to Yeah Yeah Yeah 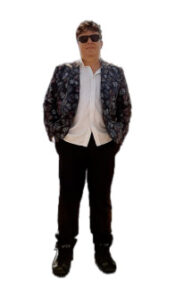